January 20, 2020
In response to the post:
Can you selectively dust of disappearance just an individual? Could you ingest it or slip it into a drink for the invisibility effect?DCs given assume D&D 5th Edition DC.

- --- -
If the rules don't specifically allow it, I'm guessing that by default it probably isn't intended to work if used in ways other than described. Otherwise it would probably be an ointment or potion.

But if players get creative why not allow something to work with side effects and caveats?

When snorting or ingesting Dust of Disappearance, roll 1d12 or choose:

You snort a line of dust of disappearance. Works. Perfect! But now, each round, make a Constitution save, DC 15. On a failed roll you sneeze, coating the opponent in dust and making them invisible. Lasts the usual dust duration.You're blind! A friend reads the small print: Not meant to be taken internally. May cause retinal transparency lasting up to 16 minutes.You itch like crazy. Allergic reaction to taking inte…
5 comments
Read more

January 15, 2020
Someone on Quora had asked How would you stat a wendigo in D&D 5e?
And I kept thinking there were already stats for a Wendigo, or something like it. But digging through, the Dungeons & Dragons 5th Edition official sources, I couldn't readily find them. So, with minimal research and a little brainstorming, came up the ideas below.

The wendigo is described as a monster with some characteristics of a human or as a spirit who has possessed a human being and made them become monstrous. Its influence is said to invoke acts of murder, insatiable greed, cannibalism and the cultural taboos against such behaviors.

Basil H. Johnston, an Ojibwe teacher and scholar from Ontario, gives a description of a wendigo:

The Wendigo was gaunt to the point of emaciation, its desiccated skin pulled tightly over its bones. With its bones pushing out against its skin, its complexion the ash-gray of death, and its eyes pushed back deep into their sockets, the Wendigo look…
1 comment
Read more

December 26, 2019
Another post regarding languages, this one came about as a brainstorm in response to a Quora question:
In D&D 5E, what (possibly exotic) languages could a monk have picked up in a monastery?
Depending on the monastery, I think a case could be made for literally any language.  Examples below could probably apply to other other religious, arcane or academic institutions of the right sort as well: All normal languages - Might be common if the institution focuses on learning in general.Axiomatic and/or Gith - Axiomatic was proposed as a descriptor of lawful plane traits in D&D 3rd Edition. A language of this sort might be common in monasteries run by by the Githzerai, or those founded on Githzerai teachings. Possibly also useful for legal training.Anarchic - Similarly Anarchic was proposed to describe chaotic qualities.  This might be used by sort of "anti-monks", chaos-warriors, or covenant of sorcerers of unmaking. Basically any group whose philosophy involves sidesteppi…
Post a Comment
Read more 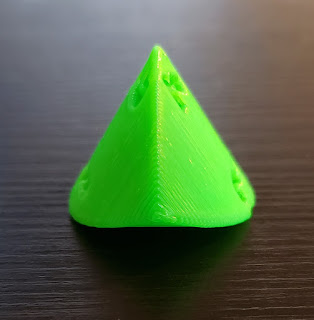 November 25, 2019
Working on Creatures & Catacombs today and finally realizing this is definitely not going to end up the minimalist dream I'd originally intended.  While trying to give at least a little description to the various PC races, the idea of language came up, and I started wondering if I should include Thieve's Cant.  This further got me wondering what the heck a "cant" even is.

Wikipedia turned up the definition:
A cant, cryptolect, argot, anti-language or secret language is the jargon or language of a group, often employed to exclude or mislead people outside the group. Each term differs slightly in meaning, and their use is inconsistent. This was frankly fascinating.  It inspires the idea of sub-languages spoken by various in-groups concealing the secret or semi-secret in broad daylight.  Not sure I'll manage to include this gracefully when running my own sessions, but I'd like to put the idea in there so it's available if I need it.  The real temptation is…
1 comment
Read more 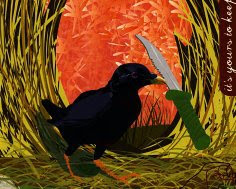 Another response to a Quora question.
Choose one or roll 1d20:


1) Dragons are the bower birds of the monster world. They need to make their lairs as shiny and full of cool stuff as possible to attract a mate.

2) The riddle:
In marble walls as white as milk,
Lined with a skin as soft as silk;
Within a fountain crystal clear,
A golden apple doth appear.
No doors there are to this stronghold,
Yet thieves break in and steal the gold. Actually alludes to dragon eggs, the embryos of which require gold during certain developmental stages.

3) There was once a more common form of vegetation called Glintweed, whose leaves had an iridescent sheen when viewed in direct sunlight. For various reasons this plant functioned as ideal nesting material for dragons.
Unfortunately, as humanoids began to mine large quantities of precious metal ores, dragons started running into a variant of the dragonfly / oil problem: To the instinctual side of a dragon’s brain, lustrous higher atomic weight refined metals l…
Post a Comment
Read more

Mommy, why am I a Tiefling?

November 13, 2019
A Quora user asked the question:
In DND, can a Tiefling be born from two human parents?
My answer to any question along these lines is almost always going to be:
Yes! (setting norms permitting)
To find out why mummy and daddy are human and you're not, pick or roll 1d20:

Thauma-genetic manipulation at the fertility clinic.Surrogate birth.Cuckoo demon left an extra bun in their oven while no one was looking. Your twin sibling looks perfectly human though.Parents made a pact with the Infernal powers, dedicating their next child to the Grand & Decadent Cause. (ANGSTY TEEN TIEFLING: Jeez! Lay off mom and dad! I don't wanna do your stupid dark destiny plans!)One of your parents used to be an infernal pact warlock before you were born. They turned from that path a long time ago, repented, and tried to make amends for the things they did during those times. But a part of the pact they'd overlooked ensured their first born would be a Tiefling. So here you are. Sorry honey.The car y…
4 comments
Read more
More posts