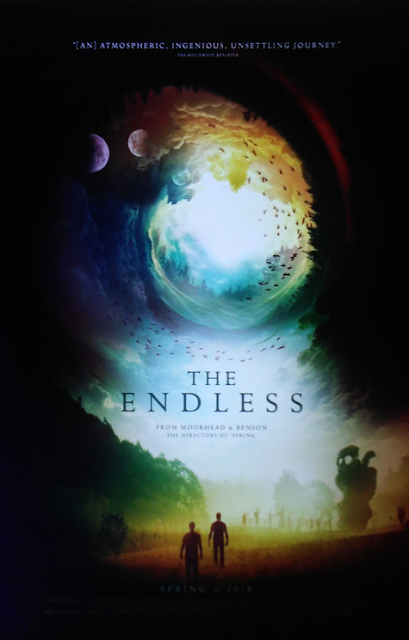 I'd been meaning to watch The Endless for awhile since it came on Netflix and finally got around to it last night.  As it kind of came across in the teaser, this was a middling, somewhat light, cosmic horror movie.

The premise starting out put me in mind of the 2007 math-cult film Believers.  But as The Endless progresses, the cultish nature of the group in Camp Arcadia becomes less of an issue compared to the otherworldly nature of the place itself and the looming supernatural threat. In the end it reminded me a little of the premise of Jeff VanderMeer's Southern Reach Trilogy books (though I haven't seen the movie Annihlation, based on the books, so I'm not sure how closely that parallels the premise).

For my tastes, the premise and situation were fairly interesting, and the special effects were appropriately understated in some spots and adequately dramatic in other bits.  But the film was not without flaws:

After the first couple scenes there was a definite air of hipsterdom to the film. With a bit of variation, it really focused on cool-adjacent young-adult-looking people and their hobbies.  And, fair enough: hipsters get to have films made about them too.  And it fits the story premise. But something about it felt like covering for the fact that this is the type of young, artsy crowd who might make a movie like this.

The characters and their actions for the most part made sense. But, on a scene-by-scene basis, their motives and interactions sometimes seemed a bit "off" or not entirely clear. This may in part have been an attempt to keep things mysterious, or have characters "in the know" covering up their knowledge. But I couldn't help feeling that they were almost talking past each other sometimes in cases where it didn't really add anything.

Scenes and actions sometimes felt a couple beats slow. Usually this seemed an attempt to dwell on the weird ambiance of the place, and usually it was fine. But sometimes it seemed a little overmuch, and I was ready to get on with the next bit already.

Some things in the film were not made particularly clear. In the interest of leaving things a little mysterious this wasn't too bad. But occasionally it was either a little silly or required some reading between the lines. For instance:

In conclusion:  The height of moviemaking, The Endless is not. And I could certainly see it as not being quite to everyone's tastes.  But, general, I was personally satisfied with the film.  Then again, I found Primer (2004) to be not completely terrible and kind of innovative.  So take my recommendation with a grain of salt.