Background and Evidence in Dungeons and Locales 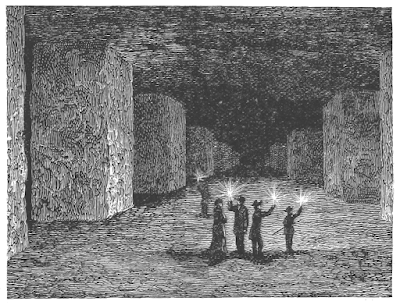 Anne (of DIY & dragons and Bones of Contention) has recently been running a weird post-human setting for for us using Mausritter. Today she was reflecting how she realized the recent dungeon delve we were involved in lacked any real ability to socially interact with the occupants or phenomena it contains.

But, while this might limit things in some ways, I don't think that's necessarily bad.  There can be a variety of different, valid ways to set up a scenario, and not all of them necessarily have to involve social interaction.

Leaving aside for now specific physical challenges and dangers, or interactions with more recent denizens of an area; I like having locations set up based on an event or events that happened there in the past, with the nature of things in the area dictated largely by the consequences of those events.  There are several ways I think revelations about past events can play out, either in any given sub-location (room), or in the location (dungeon) as a whole:

Even these may not be an exhaustive list of all possible types of revelatory interactions.  And none of these methods of revelation are necessarily better or worse than the others, but each provide a different tone or opportunity to the situation:

Interactive witnesses may have more information, but it may be tainted by viewpoint or their own motives.  Or they may be hostile and difficult to gain information from.  Or it may be incomplete for other reasons (only a glimpse, only saw part of the process, only heard stories from ancient ancestors, etc.).

If there's only cryptic evidence, or straightforward evidence of limited scope, then the characters may never figure out everything about the area.  But this can be okay for adding a sense of mystery.  After all the actual past is not necessarily completely knowable in a lot of crime or archeological instances.

It may be in some ways more fulfilling to find out everything about the history of the situation, but the aroused and unfulfilled curiosity of not knowing all can provide an interesting feeling as well.